The LeRoy Butler Story - an excerpt

We were up in the fourth quarter, 14-0, when Vince Evans threw a screen pass to Randy Jordan, which I read perfectly. I hit Jordan as he spun around and the ball popped out. As I looked around for it, I saw Reggie running towards it.  He scooped it up and started towards the goal. In the meantime, defensive lineman Bryce Paup threw a block and fell right in front of me. Steve Wisniewski, the Raiders' Pro Bowl guard, blocked Reggie, keeping him from running away with it. 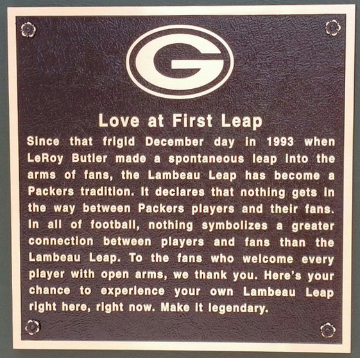 As I got closer to him, Reggie and I made eye contact.  After I jumped over Paup, Reggie flipped me the ball and I just took off. Most vivid in my memory is how loud it was in the stadium during that run. Our fans were going crazy. As I reached the end zone, I threw the ball down and jumped up into the stands and the fans, many of whom were dressed in hunter's blaze orange to stay warm, caught me. They wouldn't let me go or throw me back  I was up there quite a while. It was the birth of LeRoy's Leap!

It made me feel good for the fans in the end zone because that area turned out to be great seats. Instead of fighting to get on the 50-yard line, they had the potential to get up close and personal with their favorite players if they scored. Ever since that first spontaneous leap, fans at Lambeau tell stories like, "Oh yeah, I caught William Henderson in Row 2 in the end zone," or "I caught Dorsey Levens, Edgar Bennett, or Antonio Freeman."

Players on offense had many more opportunities for the Leap than those of us on defense. But each of the other three times I brought an interception to the end zone at home, I did it and loved it.

A Story of Dreams and Determination